Paste vs Liquid Wax: Which Shine Lasts The LONGEST?

Vehicle paint surface protection has a long and illustrious history. Car wax is, without a question, the most well-known and widely used ingredient for keeping paint protected from the elements and appearing crisp.

Waxing is the most effective technique to keep a car appearing new and glossy. It not only improves the aesthetic of a car, but it also helps to preserve the paint and metal. Wax works as a barrier against pollutants in the environment and contaminants on the road.

Car wax comes in a variety of forms, each with its own application process. When you break them down, you'll notice that they're two completely separate products: paste wax and liquid wax.

Comparing paste and liquid wax is like comparing apples and oranges. Paste wax (in a lot of cases, particularly with carnauba wax) is made from natural ingredients, whereas liquid wax is made in a lab or is a synthetic wax. So, this nicely sets the stage for our discussion today: which is better for waxing your car, liquid or paste wax?

What Exactly Is Paste Wax? 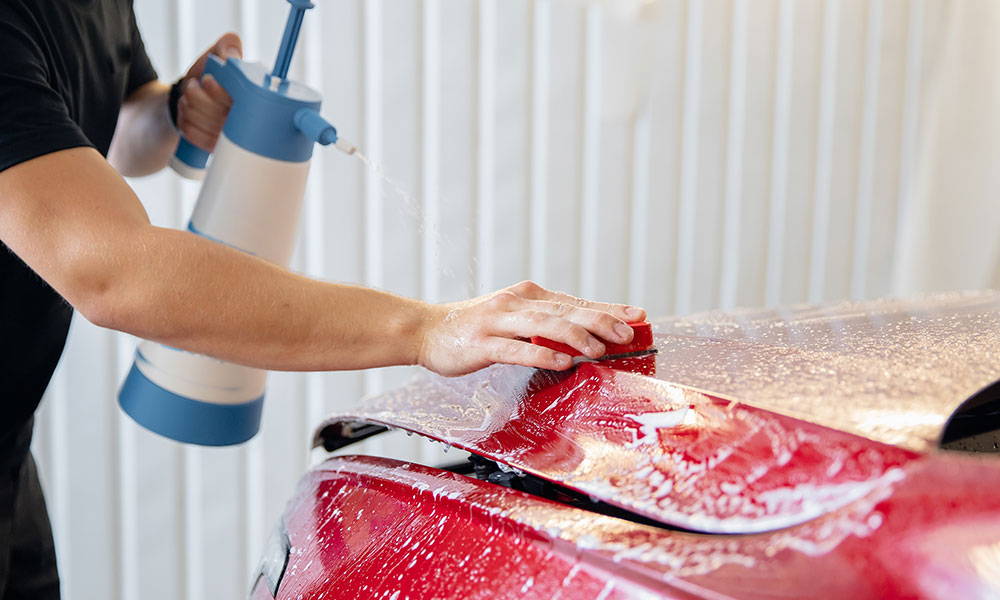 Carnauba wax is extracted from the leaves of this palm tree, processed, and then blended with other waxes such as beeswax or turpentine to make the ultimate paste wax product, which is then sold.

Waxing the car by hand entails placing the paste substance on an applicator pad, then rubbing the pad in a circular pattern across the paint surface. Afterward, the paste wax is allowed to flash or harden for a few minutes before being removed with a polishing pad or a clean microfiber towel.

What Is Liquid Wax And How Does It Work?

Wax is defined as a wide class of organic compounds composed of solids that are malleable or lipophilic in nature. Because they are organic in origin, lab-created or synthetic waxes are not waxes at all, despite their appearance.

Rather than a natural car wax, it is a synthetic polymer that performs the same function as natural car wax by producing a hard shell over the paint surface.

The Types of Car Wax on The Market 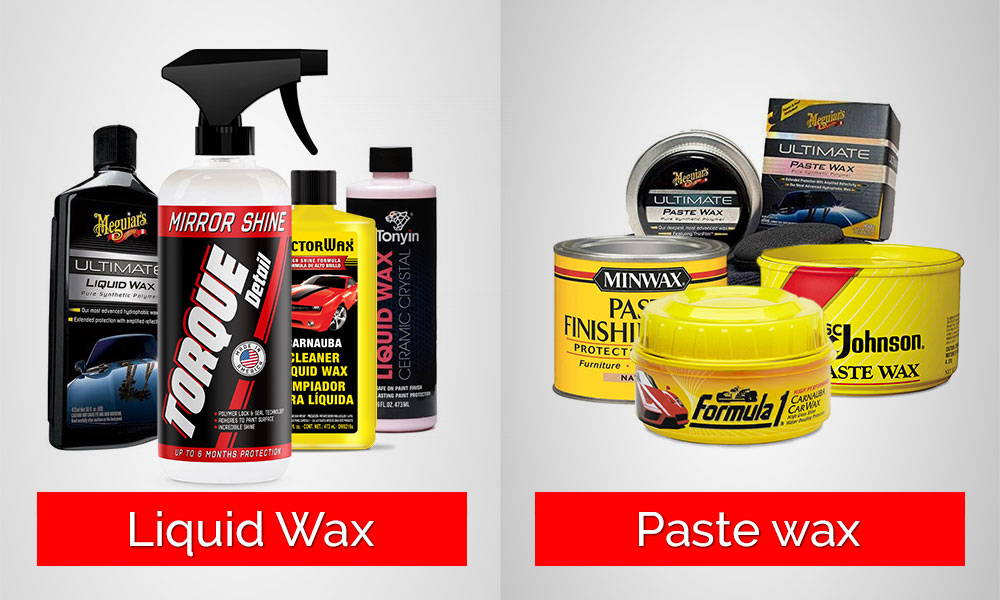 While car wax is available in either paste or liquid form, there are a variety of mixtures from which car owners can choose depending on the effects and durability they want.

Paste Wax: I'm willing to wager that your father has a can of paste wax stashed away somewhere in their garage. With more than 50 years of experience in the automobile care industry, it is well-known for providing the deepest shine of any product in the wax category. It's packaged in a can, which makes it simple to brush the applicator across the car surface.

Liquid Wax: Traditionally offered in tubes or squeezable bottles, with the tube being the most common. Squeeze a tiny amount onto a microfiber towel and apply a thin coat similarly to how a paste wax is applied.

For the Torque Detail Mirror Shine, the liquid wax comes in a plastic bottle with a spray nozzle, therefore a spray wax making it super easy to apply on your car to provide a shining appearance. It is designed to be hydrophobic so it repels water and protects your car coat even after a good car wash. It is used to protect surfaces from scratches and dings. The spray wax can be applied directly to the surface or by using a microfiber towel in the manner instructed, and then buff away any remaining residue in order to complete the wax job.

What Ingredients Can Be Found In Car Paste And Liquid Wax, And How Do They Work?

We all want to know exactly what is in the items we use, and this is especially true when it comes to car care products. Assuming that wax is a single-sourced product is a common misconception, the reality may be quite different.

Different paste and liquid wax products contain varying amounts of some of these ingredients in varying proportions, depending on the product.

This is the substance that is obtained from the palm tree. It's natural and organic, and it's the secret sauce that gives it its protective properties.

It is found in honeycombs, and beeswax is responsible for helping carnauba wax cling to paint.

When you hear the term "synthetic wax," it refers to silicones or plastics that have been made in a laboratory. Paint sealants contain a high concentration of this compound as its major constituent. It provides the longevity that carnauba wax does not - but at the expense of a significant reduction in shine.

Chemical solvents extracted from crude oil, petroleum distillates make it easier to apply and remove paint by making it easier to break down crude oil into solvents.

Plastic-like compounds known as resins are commonly employed in paint sealants (synthetic wax), where they improve the product's longevity by adding more of them to the formulation.

What Are The Advantages And Disadvantages Of Paste And Liquid Wax?

If you are a professional detailer and decide to choose a high-quality paste/liquid wax as your paint protection solution, there are a number of advantages and disadvantages to think about.

Which Is Better: Liquid Wax or Paste Wax, and Does It Make a Difference?

The advantages of paste wax include the fact that it produces an exceptional shine and enhances car look. Carnauba wax contains natural oils that aid in the formation of a protective shell that intensifies the luster of the paint.

This is a particularly strong character. It does an incredible job of protecting the paint from UV rays, mild scratches, and some chemicals once the natural wax has cured completely.

An all-natural answer: What can we add to this discussion? In all, if it's good enough to preserve palm trees in a tropical forest, can you imagine how well it'll work on your automobile?

Paste Wax's disadvantages include the fact that it is expensive. Natural items are more expensive than their synthetic counterparts. For natural pastes and carnauba waxes, the same principle applies.

Only a few months in duration: Despite the fact that it is fairly sturdy, it wears out things rather quickly. In fact, the longer paste wax is exposed to the elements, the faster it will wear away.

Is it a time-consuming task? Paste wax is the preferred method of polishing by vehicle aficionados, mostly because the process is considered part of the ownership experience. Natural wax application takes time, and you must also strip it and reapply it after each application. Overall, the process requires a good amount of elbow grease.

The Advantages and Disadvantages of Liquid Wax

The liquid variety of wax is the most often utilized today and also the most widely sold. Despite the fact that they are often easier to apply than their pasty counterparts, there are some advantages and disadvantages to consider.

Lasts Longer: The normal liquid wax will last up to 6 months before needing to be replaced. The paint sealant department (which is really a liquid wax on steroids) has a shelf life of up to a year, which can be extended further.

The disadvantages of liquid wax are that it takes longer to dry: While it is easy to apply liquid wax, the composition takes longer to flash or remove in the beginning. When you multiply this by the total number of passengers in the vehicle, it might be a test of your patience.

It has no effect on the sheen of the hair. Well, unlike paste wax, liquid wax does not deliver the depth of color and increase gloss that paste wax does. This is owing to the fact that these formulations contain fewer natural oils.

So, which is better: Liquid or Paste Wax? Which is the most appropriate for you?

The purpose of paste and liquid wax is straightforward: to preserve the car's paint job from fading while also reducing the amount of fading. So, how do you make a decision between the two options? The following are some bullet factors to keep in mind when making the decision between a paste and a liquid wax:

EXTREME WEATHER CONDITIONS: For individuals who live in hot areas, paste wax will perform in the same way that it does in Brazil's scorching heat. For people who live in colder areas, liquid wax containing synthetic components is preferable.

Both the liquid and paste wax variants are used for the same thing. Using these, you can efficiently preserve your automobile's paint from fading and keep scratches to a minimum. The ease with which liquid wax such as Torque Detail Mirror Shine can be applied and its durability, makes it the superior choice for everyday drivers. You may also choose liquid waxes, if you have a newer car or a well-preserved finish. When prepping a historic car for an occasion, paste, on the other hand, maybe an excellent alternative. It enables expert detailing results to be achieved, resulting in a vehicle that shines like new.

It is our recommendation to individuals who are unsure which kind of wax is ideal for them to select one that meets their degree of comfort, their needs, and of course their financial constraints, as described above which makes Torque Detail Mirror Shine the best choice to go for as it fits the above criterias. 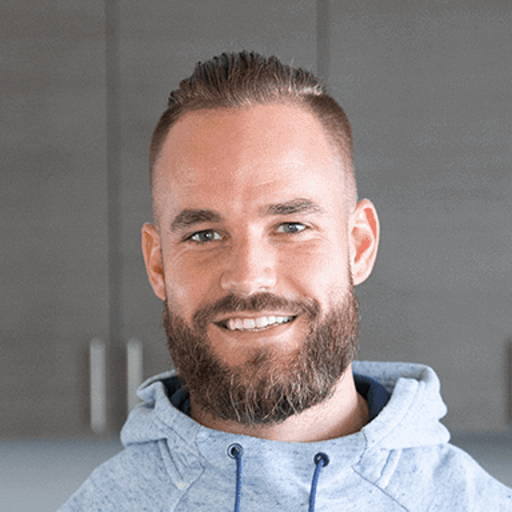